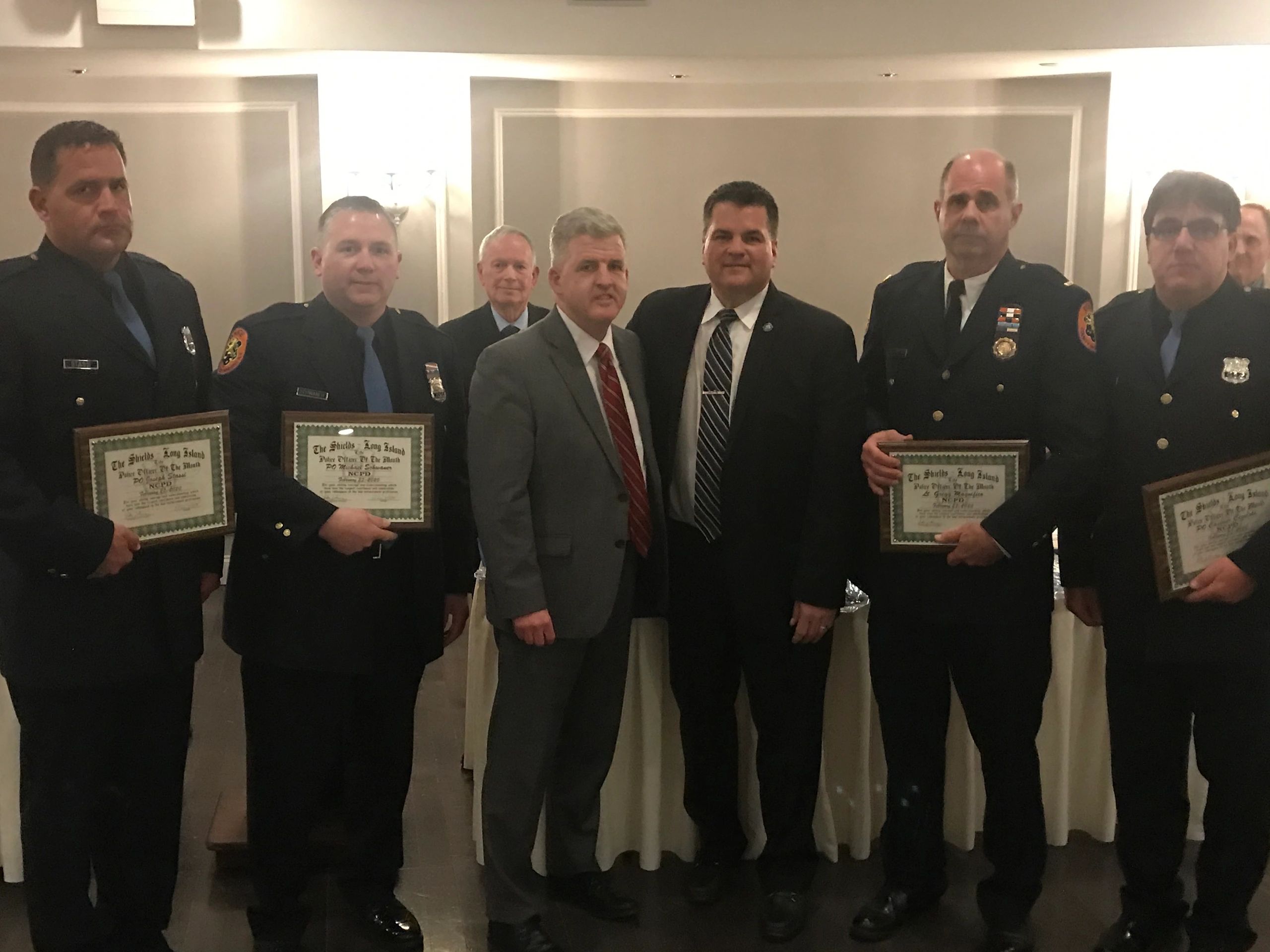 COP of the month

On May 1st, 2019 First Squad Detective Lance Zimmerman received a phone call from retired Nassau County Police Officer. The retired officer stated that he was contacted by someone who stated that his granddaughter had been arrested and that he needed to mail $7,000 in USC to an out of state address for bail money. The retired officer recognized this as a scam and was looking to report the incident.

Detective Zimmerman immediately reported the situation to Detective Sergeant Alan M. Otto. Since the fraudster was still in contact with the victim, after a quick conference with Detective Zimmerman and Detective Sergeant Otto it was determined that the best chance for apprehending the fraudster was to have the victim call the fraudster back, saying he could not mail the money but would be happy to hand it over in person. The scammer initially declined but called back shortly after to say that he could pick it up in just thirty minutes at a local Stop and Shop Store, located on Jerusalem Ave. Bellmore.

Detective Sergeant Otto requested the assistance of First Precinct Plain Clothes Officers and in a matter of moments they had quickly all the NCPD members in various unmarked cars heading to Stop and Shop to surveil the location in the most covert manner possible as not to alert the perpetrator.

Upon returning to the First Squad, Detective Zimmerman was able to secure a full written statement of Admission from the now Defendant.

The Long Island Shields are proud to name Detective Sergeant Otto, Detective Zimmerman, Detective Budimlic, and Detective O’Leary as our Police Officers of the Month for their stellar performance of duty and exemplary actions combined with flawless cooperation between department members far exceeded their normal duties and expectations. The investigation in regards to this case resulted in the arrest and apprehension of a felon who preys on our most vulnerable members of society. I congratulate these members of the First Squad, Nassau County Police Department.

Narrative for Cop of the Month

Tonight, we honor as our Police Officers of the Month members of the Nassau County Police Department’s Marine Bureau, Dive Team.  Lieutenant Gregg Magnifico, Police Officers Casimer Cegelski, Joseph Stassi, and Michael Schwaner. Gentleman please rise and then we’ll have you come up at the completion of the presentation.

These Officers while assigned to a Dive Operation did recover the body of a missing person who was last seen in a lake earlier that week. The following is a summary of the circumstances.

On Sunday morning December 22, 2019 at approximately 0200 hours, 911 received a call for a possible person in the water at the lake located at Merrick Road and Brookside Avenue in Freeport.

Yes, the lake behind this building!

The witness stated that he saw a male who he knows jump into the lake and he didn’t see him come out. That night a search was conducted by the Freeport Fire Department, Nassau County Police, Freeport Police with negative results.

A Freeport family had reported their family member missing and the described person was similar to the male who was reported to have jumped into the lake.

On Monday night, December 23, 2019, Lieutenant Magnifico, Marine Bureau, Commanding Officer   was contacted via phone by the Missing Persons Squad and informed about the case. He was told that the missing persons jacket was found frozen on a bench which is next to the lake on Sunday Morning. The victim’s hat and supposedly a boot were also recovered at the scene. These articles along with the coat were taken by Freeport Police Department and held as evidence. Missing Person Squad requested that the lake be searched for the missing person. LT Magnifico advised Missing Persons to confirm the locations where the clothing was found because that will assist Marine Bureau  as a reference point to start the search.

The lake is located at the corner of Merrick Road and Brookside Avenue in Freeport and is known as Milburn Pond. It is approximately 6 acres in diameter. It is used as a run off basin from Brookside creek which flows south into Baldwin Bay. About 15 years ago this pond was dredged to make it deeper and seawalls were installed around part of the lake. The pond is about 15 feet deep in the middle and bottom is covered with branches  and composting leaves. A waterfall was built at the south end of the pond to act as a dam to keep the ponds water level at a certain height.

On December 24, 2019, the Underwater Search and Recovery Team responded to the pond to conduct a search. The witness was asked to come to the pond to show the divers where he had last scene the missing person, but he refused and hired a lawyer for representation. Using the bench where the missing persons coat was found as a last seen point the dive team, which consisted of Lieutenant Magnifico and Police Officers Stassi and Schwaner conducted a search of the pond. The pond which is about 3 feet deep at the seawall gets progressively deeper as you move away from shore. There is a steep drop off located about 6 feet from shore. The divers searched the shoreline and an area approximately 50 feet wide by 60 feet into the pond with negative results. There is zero visibility in the pond so the entire dive operation was done by feel. While at the pond that day, a person who knew the missing person was walking around. When asked by Lt. Magnifico if he was there the night the person  went missing, he stated he was a friend of the families that he had possibly had seen a pair of boots in the pond which could be the victims. The divers responded to that location which was about 60 yards from the coat was found and recovered a pair of Timberland boots. These boots were positively identified as belonging to the victim by the victim’s family, who were present at the park observing the actions of the Underwater Search and Recovery Team.

Due to the size of the pond and with no credible witness who could tell the divers where the last place the victim was seen, the only way to search the pond would be by utilizing a Side Scan Sonar. This machine uses radio waves to record the features on the lakes bottom. Side Scan Sonar provides a 2-dimensional picture of the bottom of a water way. While looking at the display of the side scan you are looking at shadows and trying to decipher what those shadows actually are.

On Saturday, December 28, 2019, members of the Underwater Search and Recovery Team consisting of, Lt. Magnifico along with Police Officers Stassi, Schwaner and Cegelski arrived at the pond to conduct a side scan search of the lake bottom. The missing person had still not been located or had contacted his family during the Christmas Holiday.  With Lt. Magnifico piloting the boat and conducting the search pattern, Officer Schwaner was viewing the screen of the side scan looking for anomalies on the pond’s bottom. A north/ south grid search was conducted of the pond with no visible anomalies discovered. Since side scan shows shadows to detect objects another search of the pond was done using an east/ west grid, again no visible anomalies were detected. Different strategies were discussed among the team members and if was decided to conduct another search of the pond was done using a different angle. During this search a shadow was detected by Officer Cegelski who was monitoring the side scan sonar screen that could not be explained. The location of the shadow was marked and Lt. Magnifico then drove by this spot at different angles revealing different pictures of the shadow. Since the shadows still could not be explained, it was decided to put divers in the water to determine what was causing this anomaly.

Officers Cegelski and Stassi donned dive gear, while Lt Magnifico and Officer Schwaner set up a dive pattern line. A jack-stay type of search would be used to make sure that the area of the shadow would be covered. A jack-stay search uses a line tied with anchors at both ends of it. At one of the ends an up line is attached with a float so that the divers can find the pattern line on the lakes bottom with the zero-visibility water. The divers entered the water and began their search, on the second pass of the jack-stay the missing person was located on the lake bottom. The Dive Team physically moved the victim from the ponds bottom and brought him to an area by the shore where his frozen body could be respectfully and successfully removed from the water. This was no easy task, the victim was rather large, the water conditions were near freezing and the shoreline was not conducive to a smooth transition from water to land. The Dive Team accomplished this difficult task while under the watchful eyes of the victim’s family and members of the public who had gathered and were observing their every move from a safe distance.

Lieutenant Gregg Magnifico, Police Officers Casimer Cegelski, Joseph Stassi, and Michael Schwaner. Of the Nassau County Police Department’s Marine Bureau’s Underwater Search and Recovery Team distinguished themselves by this outstanding achievement, which was performed in a manner beyond normal expectations with similar circumstances, or by taking appropriate action in this unusual and hazardous circumstance bringing the search to a safe and  successful conclusion while bringing the victims grieving family closure and the knowledge that their love one, although tragically, had been found.